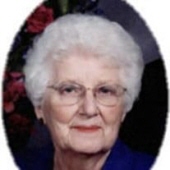 
Marian was born June 28, 1924 in Lincoln Valley, ND, to Joseph and Hilda (Koepplin) Leintz. She graduated from high school in Anamoose, ND, and graduated from Interstate Business College in Fargo, ND. She lived and worked in California for a short time, before returning to the Lincoln Valley area, where she taught in country schools for several years.


Marian was a very strong, honest, well-respected, and loving woman. She was extremely devoted to her family. In latter years, her world revolved around her grandchildren. She will be deeply missed.

To order memorial trees or send flowers to the family in memory of Marian A. Miller, please visit our flower store.