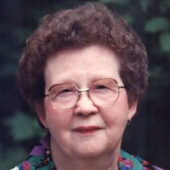 Margaret Deloris Swift was born January 11, 1920, the daughter of David and Esther (Klade) Swift, in St. Paul, MN. She was raised in Mankato, MN, where she attended school. On May 15, 1939, she was united in marriage to John W. Hoerr in Mankato. They made their home in southern Minnesota before settling in Moorhead in 1959. John died in 1995 and she continued to make her home in Moorhead.

She was a member of St. Joseph Catholic Church, Moorhead. Margaret was very artistic and taught ceramics for many years and she also enjoyed sewing and reading books. Her greatest love was her family and spending time with them, especially her grandchildren.

She was preceded in death by her parents; husband, John; grandson, Matthew Hoerr; brother, David; and sisters, Lillian and Dorothy.

A gathering of friends for Margaret will be one hour prior to memorial service.

To order memorial trees or send flowers to the family in memory of Margaret Hoerr, please visit our flower store.