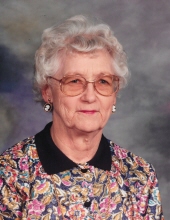 Margaret grew up in Moorhead. After the death of her father in 1933, Margaret and her sister, Hazel, were raised by her loving foster parents, Nils Christen and Johanna Hansen in Sabin, MN. After high school, Margaret worked at Eddy's Coffee shop where she met her future husband, Dennis Brokmeier.

They were united in marriage on April 22, 1951, in Crookston, MN. Margaret and Dennis built a home in Moorhead and raised their family. She enjoyed being a member of the neighborhood sewing club. Margaret worked as a Home Health Aide for 17 years with the Clay County Health Department and retired in 1992.

She was preceded in death by her husband, Dennis Brokmeier; parents and foster parents; brother, Lloyd Sorenson; and sister, Hazel Nybo.

Visitation for Margaret will be Friday, September 30, 2022, from 4 – 6 PM, at Korsmo Funeral and Cremation Service, Moorhead. A Celebration of Life service will be Saturday, October 1, 2022, at 11 AM, in Our Redeemer Lutheran Church, Moorhead.

To order memorial trees or send flowers to the family in memory of Margaret G. Brokmeier, please visit our flower store.