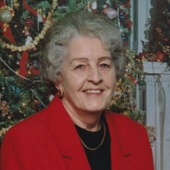 Margaret Albertha Vos was born March 23, 1929, the daughter of Henry and Emma (Jorgensen) Vos, in Galesburg, ND. Margaret grew up with a large family on a farm near Galesburg. After Margaret's father passed away, they moved to Fargo, ND, and eventually Margaret made her home in Moorhead. Margaret became a banquet waitress at the Holiday Inn.

On May 5, 1949, Margaret was united in marriage to Raymond D. Johnson. Margaret was known for her spunky personality and her good sense of humor. She was a caring mother of six children, who was involved in many activities with them.

Among the many activities Margaret was involved in, she was a den mother for Cub Scouts and a leader for Campfire Girls, and she also taught Sunday school at Our Savior's. In 1969 Margaret helped organized Moorhead High Hockey Booster Club, which later became the Blueline Club.

As her kids grew up, she became more involved in the VFW Auxiliary and American Legion, making brownies to sell on bingo nights. Margaret had a lot of crafts she enjoyed over the years including quilting, needlepoint, and even sewing many of her children's clothing.

A Visitation for Margaret will be one hour prior to her service.

Burial will be in Park Lutheran Church Cemetery, Hawley, MN.

To order memorial trees or send flowers to the family in memory of Margaret A. Johnson, please visit our flower store.