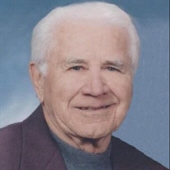 To watch the recorded service for Lyle, please follow this link:
https://portal.memoryshare.com/memoryshare/videoplayer/lyle-anderson-8121585

Lyle Vernon Anderson passed away peacefully Wednesday, December 8, 2021, at his daughter's home in Fargo, ND, at the age of 100. He was born April 30, 1921, in Fargo to Harry and Clara (Larson) Anderson. The second of seven children, he spent his early childhood on a farm in Christine, ND, and his adolescence in Walcott, ND. The family moved to Fargo where he graduated from Fargo High in 1941.

He joined the Marines in 1942 and proudly served his country for 3 years in the Pacific Theatre. He landed in Nagasaki with the first wave of Marines after the Atomic bomb was dropped. His job was to drive ammunition to the front lines. The Marine Corps shaped his life in every way possible - in how he viewed faith, family, and freedom. This is also where he and fellow Marines formed friendships that would last a lifetime, attending Marine Corps reunions across the United States for years.

Lyle returned home from Japan on December 23, 1945. He viewed the American flag with high regard and instilled that sense of patriotism in each of his children and grandchildren. Lyle's life was the epitome of the Marine Corps motto "Semper Fi," meaning, "always faithful."

After several career ventures, Lyle went into business selling school buses. In 1949, he met the love of his life, Ginny Mohn. They married in June of 1950 and started their life together in Moorhead, MN, and had three children: Kathleen, Patricia, and Thomas. In 1971, he founded Anderson Superior Coach Corporation.

Lyle loved life, he had great one-liners, and loved to tell stories. One of his great joys in life was to spend time with Ginny and their family at their cabin they built on Big Cormorant Lake. Lyle's heart for children started with his deployment and continued with his children, grandchildren, and great-grandchildren. He loved to watch them grow, take them fishing, and give back rubs. At the age of 100, he taught his great-grandchildren how to make walking sticks, by which time he had already made 300. He treasured his wife Ginny and enjoyed traveling across the United States with her in their retirement. He was a man of great faith and was active in his church.

Grateful to have shared his life are his children, Kathy (Kent) Yohe, Fargo, Pat (Don) Pike, Fargo, and Tom (Allison) Anderson, Dallas, TX; his grandchildren, Mark (Michelle) Yohe, Allison (Dave) Harmon, Katie (Brett) Mitchell, Laura (Darrick) Buchholz, and Taylor, Rachel, and Alex Anderson; and his five great-grandchildren, Jackson and Christian Harmon, Grace Yohe and Charlie and Clara Mitchell. He is also survived by his sister, Betty Pederson, Sioux Falls, SD; sister-in-law, Dorothy Feir, Park Rapids, MN; brother-in law, Warren Mohn, Detroit Lakes, MN; and many special cousins, nieces, nephews, and friends, each who considered him a treasure. He will be deeply missed, but his legacy will live on in the lives of his family and friends.

Memorial donations may be made to Hospice of the Red River Valley, Gideons International or The Billy Graham Association.

Visitation will be Sunday, December 19, 2021, from 4 PM to 7 PM in Korsmo Funeral Chapel, Moorhead, with a prayer service at 6:30. The celebration of life will be Monday, December 20th, at 1 PM in The Lutheran Church of Christ the King, Moorhead. Burial will be in Sunset Memorial Gardens, Fargo.

To order memorial trees or send flowers to the family in memory of Lyle Anderson, please visit our flower store.