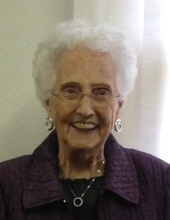 Lucille was born in Chippewa Falls, WI, on January 22, 1923, to Arthur and Clara (Hanson) Martell. The family moved to Moorhead, MN, when Lucille was in grade school, and she graduated from Moorhead High School in 1941.

Lucille met Robert D. Hennemann in school and they later married in Avon Park, FL, on December 6, 1943. During her time in Florida, she worked at the Officers Club on the Army Air Corp base. Once Robert deployed to Italy, Lucille and her sister, Viola ventured to California for a short time.

Upon returning to Moorhead, where Lucille and Robert made their home, she worked for Bell Telephone, St. Ansgar Hospital, opened Little Lamb Daycare, and worked at The Classic and Neubarth Jewelry, located in the Moorhead Center Mall and finished her career with Eide Jewelry. Lucille was a loving mother and homemaker to Laura, Mark, and Darrell.

Lucille enjoyed spending time at East Silent Lake, MN. She was involved in church activities with the Community of Christ, as a women and youth leader. Lucille loved spending time with others and doing anything that kept her busy, such as gardening, sitting in the sun and traveling. Her biggest joy was spending time with her family and friends. At the time of being a resident at Sharp View, she enjoyed planning and being the social organizer for the Sharp View community.

Lucille’s Funeral Service will be 2:00 PM, Thursday, June 30, 2022, in Korsmo Funeral Chapel, Moorhead, with visitation one hour prior to her service. Burial will follow at Riverside Cemetery, Moorhead.

To order memorial trees or send flowers to the family in memory of Lucille A. Hennemann, please visit our flower store.