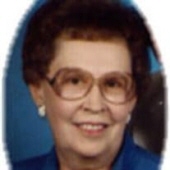 Lucille 'Lucy' Augusta Zentgraf was born in Wahpeton, ND, on August 20, 1924, to Robert and Christine (Deede) Zentgraf. After high school, she took courses at a business school, worked in a bank for a while, and then joined the WAC Purple Heart Platoon in 1945. She met her husband Arthur (Art) Brown while she was a ward administration clerk at Baxter General Hospital, Spokane, WA, and he was a patient after being wounded while serving with the 90th Infantry in Czechoslovakia. They were married 3 weeks later (Aug. 27, 1945) in the post chapel. After discharge they lived in Seattle for 2 years. They then moved back to Moorhead, MN, where they built a home and had 4 children. They were married for 58 years.

Lucille was secretary/office manager of the Fargo-Moorhead Credit Bureau, a member of the Real McCoys Homemaker Club (later called Sew-Chat- & Eat), a member of the American Legion Auxiliary, and along with her husband, a charter member of the Circle 8 Square Dance Club in Moorhead.

Traveling, camping, fishing, boating, square dancing, and sewing or making crafts were things they enjoyed together. They also wintered in Apache Junction, AZ, for 15 years.

Lucille and her family were members of Our Redeemer Lutheran Church in Moorhead. Her father was a deacon of the church when the present church was built.

To order memorial trees or send flowers to the family in memory of Lucille A. Brown, please visit our flower store.