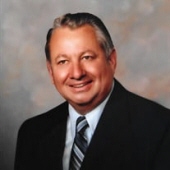 Lowell Dean Abbott was born October 16, 1931, in Moorhead, MN, to David M. and Clara (Hanson) Abbott. Lowell graduated Moorhead High School in 1950. While spending the summers working on farms, he was also an all-sports athlete with winning state trap. When he was sixteen, he had his permit to drive semi.

On January 29, 1951, Lowell joined the Army with basic training at Fort Riley, Fort Jackson, and a leadership course in Atlanta, GA. He served in Korea for sixteen months and in Japan for a five-week course in Crane and Heavy Equipment.

On December 27, 1967, Lowell was united in marriage to Marlyn Kosloske, in Sioux Falls, SD, and they made their homes in Moorhead, Walker, MN and Fort Meyers, FL. Lowell started doing construction in 1953, while also hauling milk. In March of 1955, Lowell formed Abbott, Arne, Schwindt, Inc. with a ½ yard backhoe, D-4 dozer, dump truck and a pickup. His first job was in Kimball, MN. Three years later he bought out Arne. In 1962, he started Moorhead Construction and sold out in 1982. In 1964 he partnered with H&S Construction to work in Florida for 3 years.

In his early years, Lowell was an avid stock car racer, golfer and snowmobile racer. He raced the International 500 from Winnipeg to St. Paul five times while finishing three out of five races. He was an avid hunter and loved to fish, with many trips to the oceans and to the Arctic Circle to catch that big fish. Lowell loved fishing Leech Lake as often as he could with family and friends. Lowell was a proud member of many organizations including the American Legion, Eagles, Elks Club, and VFW.

Lowell was preceded in death by his parents, David & Clara Abbott; and his son Robert.

In lieu of flowers, Lowell's family is requesting that donations can be made to Hospice of the Red River Valley or the Roger Maris Cancer Center.

Visitation will begin at 10 AM, with a Celebration of Life service at 11 AM, Wednesday, July 24, 2019, in Trinity Lutheran Church, Moorhead.

To order memorial trees or send flowers to the family in memory of Lowell D. Abbott, please visit our flower store.