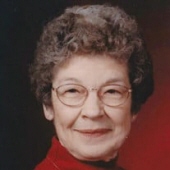 Lorraine Virginia Pladson was born June 18, 1926, in Glenwood, MN, to Clarence and Gina (Harvig) Pladson. She grew up in rural Glenwood and attended country school. She graduated from Glenwood High School in 1944. Lorraine worked for the Pope County agent.

On May 15, 1948, Lorraine married Wallace Hoium in Barnsness Lutheran Church, rural Glenwood. They made their home in Fergus Falls, MN, for six years, and Lorraine worked for Ottertail County Health. In 1954, they moved to Moorhead, where Lorraine worked in the food service department in South Junior High School, for several years.

Lorraine was an active member of The Lutheran Church of Christ the King in Moorhead, where she was involved in guild, circle, quilting and "Janitors for Jesus."

Lorraine is survived by her two sons, Steve and Bruce (Laurie) Hoium; six grandchildren; three great-grandchildren; a brother, Franklin (Marian) Pladson; and many nieces and nephews. She was preceded in death by her husband, Wallace, who died in 2014; brothers, Merlin, Orville, Stanley and Clifford Pladson; an infant sister; and sisters-in-law, Hilda Hector, Gladys, Helen, and Elva.

The family wishes to thank the staff of Eventide on Eighth, and Eventide Fairmont for their compassionate care of Lorraine over the past few years.

To order memorial trees or send flowers to the family in memory of Lorraine Virginia Hoium, please visit our flower store.