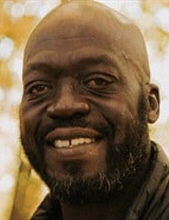 Leroy was born in Freeport, IL on May 22, 1963, to Essie Mae Dixson and Leroy Bruce. He grew up in Freeport and graduated high school in 1981. He attended the University of Wisconsin in Madison where he ran track and played football. In 1983, he broke the school record in the 400M and still holds that record today. After a couple years at Wisconsin he transferred to Iowa State University in Ames, IA, to become a member of the Cyclone Track and Field team. He was a 4-time All American during his time at ISU. As an athlete, Leroy broke many records and received many awards for his accomplishments. He will always be remembered as an accomplished athlete in high school, college and professionally.

Leroy's passion was cooking and coaching. He loved working with kids and loved every single kid he
got to coach and truly lit up every time he heard one of them yell out, "Mr. Dixson." If he wasn't coaching, he was cooking for someone. He was always experimenting with a new recipe or seasoning and loved to see the smiles on faces of those enjoying his food.

Despite being a well-accomplished athlete, Leroy was most proud of his family. He is survived by his wife of 30 years, Sara, who he met at a nightclub in Houston, TX and they have been celebrating life ever since. Their three children, Alexa (Jerry) Dixson-Griggs, Moorhead, Austin (Aspen), Horace, ND, and Alijah, Enderlin ND; and two grandkids, Emmitt Griggs (18 months) and Aurora Dixson (4 weeks). Leroy spoke often about his dream of having all his family at the lake in the summers. The lake was one of his favorite places to relax, fish and spend time with his family and friends.

A Visitation for Leroy will be Wednesday from 5:00 PM until 7:00 PM, with a 6:30 PM, Prayer Service in Korsmo Funeral Chapel, Moorhead.

Burial will be in the Enderlin City Cemetery, Enderlin.

At the family's request, masks will be required for the visitation, prayer service and funeral service.

To order memorial trees or send flowers to the family in memory of Leroy Dixson Jr., please visit our flower store.