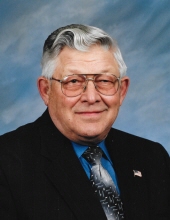 Leroy's funeral will be livestreamed, and archived, on the church Facebook page. That is
https://www.facebook.com/oursaviorsmoorhead


Leroy Gene Brua born January 29, 1931, in Albert Lea, MN, to Ole and Amanda (Nordskog) Brua. The family moved to a rural McIntosh, MN, farm in the spring of 1938. He went to a country school not far from the river bottom farm where he grew up. Leroy was later bussed to McIntosh for school, where he first caught his future bride's eye.

He helped with chores around the farm and watched his younger brothers. On a hot summer day, the boys would ride their horses, May, Babe, King and Kate, into the river to cool off, using them as diving platforms. He taught himself to trap on the Popple River and continued trapping for 60 years.

On March 15, 1952, he was united in marriage to his “sweety”” Ordelle Bernice Grundyson, at a parsonage in Erskine, MN. A few days later he was drafted into the US Army, and traveled to Fort Eustis, VA, for six months of training. He sailed to Korea on the Marine Lynx. He rode the rails up the east coast of Korea, close to the 38th parallel, working on railroad stations. On February 9, 1954, he returned to Minnesota to be reunited with his bride. A year and a half later, they welcomed their daughter, Sheila Diane.

He moved the family to Moorhead, MN, and worked in a cabinet shop. He then changed his skills to glazier fabricator. Some of his jobs were West Acres and Ushers, by the river in Moorhead. When working out of town, he would leather tool at night, filling orders for gun slings. At home, you would find Leroy building custom cabinets, china hutches, gun cabinets, or restoring an antique piece that he pulled out of a dump years before.

He found a lot on Hoffman Lake, where he could use his salvage lumber. There were lumber piles all over the yard we called “Leroy’s UBC lumber.” One of the highlights at the cabin he built is the open staircase that he tore out of the Pink Pussycat in downtown Fargo.

After retiring, he spent most of his time at the lake. He and his buddy, Louie, started a part time job remodeling homes in the lakes area. You would always see him with a pencil resting on his ear, sawdust on his clothes, and the tape measure in his pocket. Leroy’s saying was, “There is right way, a wrong way, and then there's Leroy’s way.”

Leroy died Thursday, June 23, 2022, in the presence of his family, at Frazee Care Center, Frazee, MN. He was ninety-one years of age.

He was preceded in death by his parents; sisters, Lorraine Ellingson and Bertha Suby; and brothers, Duane Brua and Trumaine Brua.

To order memorial trees or send flowers to the family in memory of Leroy Brua, please visit our flower store.