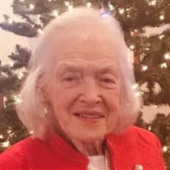 WEATHER NOTIFICATION: due to weather conditions, the funeral for Leone has been rescheduled to Monday, March 11, at 2 PM.

Leone Kathleen Nelson, 90, of Wolverton, MN, left us to stand beside God, and her husband, Donald, on Wednesday, February 27, 2019.

Leone was born November 4, 1928, to Albin and Ann (Loff) Nord, in Wolverton. She was raised east of town. She attended and graduated from Wolverton High School in 1946. Leone then enrolled in the nursing program at the University of Minnesota in Minneapolis, MN. She returned home to assist on her family farm.

Leone was united in marriage with Donald M. Nelson on September 24, 1949, in Wolverton. They purchased a farm west of town and farmed until 1965. Don and Leone then purchased the Standard Oil station in Wolverton and remained in business until they "retired" in 1986. They continued to live on the farm for 69 years, where they raised their family of four sons. Don passed away last fall on October 3, 2018.

Leone lived a life of service to her church, community, and most importantly, her family. Her contributions to the church were evident in her gifts of flowers, cake baking, and participation with Faith Women. Leone was known by many as the "Flower Lady" and the "Cake Lady." Her dedication to the church was also exemplified by her gifts of music for over 86 years. She served her community through the Legion auxiliary, and as president of the Wolverton Community Development Corporation for decades. Leone was widely known for her kindness and caring, serving in many of the finest restaurants in the area. Her experience was vital to the success of District 31 Victorias. However, Leone's love and caring of family was her greatest passion. Her love extended into the community where she was a mother to many, and beloved by all.

She is survived by her sons, Mark (Johnny), Michael, Keith (Missy), daughter-in-law, Shayla; grandchildren, Cory (Linnea), Donald (Shondra), David, Jessica, Amanda, and Garrett; five great-grandchildren; brother, Wallace (Bev) Nord; and brother-in-law, Loren Blilie; and many nieces and nephews.
She was preceded in death by her parents; her husband, Donald; her son, Harland; and sister, Sharon.

A Visitation for Leone will be one hour prior to her funeral service.

To order memorial trees or send flowers to the family in memory of Leone Nelson, please visit our flower store.