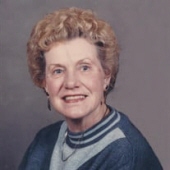 Lenore R. Reberg, 98, Fargo, ND, died Sunday, July 18, 2021, in Sanford Health, Fargo.
Lenore, known to many as "Lenny", was born January 23, 1923, at home in Grand Prairie, Barnes County near Valley City, ND, to Henry and Laura (Dobias) Quittschreiber. Lenny attended grade school at Rose Prairie, a country school near Arthur, ND. She attended high school in Arthur.
Lenore worked at a bandolier factory in the Minneapolis area with her cousin. In February of 1944, Lenore enlisted in the Women's Army Air Corp (WAACS). She received her Honorable Discharge in 1945 and was soon united in marriage to James Ruse. They had one daughter, Dee. While living in California, she worked for Southwest Bell Telephone Company.
After moving back to North Dakota, Lenny attended Interstate Business College. On August 5, 1950, she was united in marriage to Arthur Reberg in Valley City. While Art was attending Moler Barber College in Fargo, Lenny worked for Herman Stern at Straus Clothing, along with working for the phone company in Valley City.
In 1955, Lenny and Arthur made their home in Moorhead. Art owned and operated the FM Barber Shop for many years while Lenore worked part time for Carl Domer Tax Service in Moorhead, along with Straus Clothing in Fargo. After 29 years as office manager, Lenny retired from Straus Clothing in 1989.
During retirement, Lenny spent time mentoring and managing senior centers in Fargo and Moorhead. She loved playing Bridge and in her later years, she was a regular on casino bus trips. Lenny was honored to be part of the 2007 Honor Flight to Washington, DC, meeting many new friends along the way.
Lenny was loved by all and will be dearly missed by her entire family. She is survived by her daughter, Dee (Barney) Wayman; son, Steve (Renee) Reberg; nine grandchildren; 19 great-grandchildren; and nephew, Jim Quittschreiber.
A private family service will be held followed by interment at Fargo National Cemetery.

To order memorial trees or send flowers to the family in memory of Lenore R. Reberg, please visit our flower store.