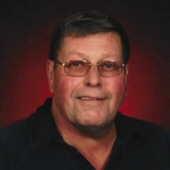 Lee Nygaard, 77, of Moorhead, MN, died Wednesday, September 11, 2019, following a more than six year battle with cancer, in Rosewood on Broadway, Fargo, ND, under the care of Hospice of the Red River Valley.

Leland Richard W. Nygaard, the son of C. O. and LaVern (Kelin) Nygaard, was born in Grand Forks, ND, on October 4, 1941. As a young child, he moved with his family to Breckenridge, MN, where he grew up and received his education. Following his graduation, he enlisted in the US Air Force, and served for four years.

While in the Air Force, he married Joan Johnson, and they were blessed with three children. They were later divorced.

Lee lived in Dilworth, MN, and worked first for Earl's Super Valu, and later for Simon's Home Furniture in Moorhead.

On May 24, 1974, Lee married Jean Nadrchal Stucke in Sisseton, SD. They made their home in Moorhead, and Lee worked as a welder and fabricator for Mid-America Steel in Fargo. He retired in December of 2006. From 2012 until 2015, he was a school bus driver in Moorhead for Richards Transportation.

Lee was a member of Our Redeemer Lutheran Church for 43 years, a member of American Legion Post 21, and both the FM Walleyes and Walleyes R Us Fishing Clubs. He truly enjoyed fishing with his wife, his son, Shawn, and grandson, Gauge. He also bowled for many years at Sunset Lanes in Moorhead.

Visitation for Lee will be Sunday, Sept. 15, 2019, from 5 PM until 7 PM, with a prayer service at 7 PM, in Korsmo Funeral Chapel, Moorhead. His funeral service will be Monday at 10 AM, in Our Redeemer Lutheran Church, Moorhead. Lee will be buried in Riverside Cemetery, Breckenridge, MN.

To order memorial trees or send flowers to the family in memory of Leland Nygaard, please visit our flower store.