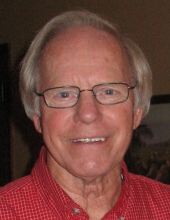 Larry L Larson, 85, Moorhead, MN, went home to be with the Lord on October 4, 2022, at Eventide on Eighth in Moorhead, and under the care of Sanford Hospice.

He was united in marriage to his high school sweetheart, Gail Kaale, June 28, 1958, at Karmel Covenant Church, rural Princeton, MN. They had two sons, Bradley and Bryan.

The family lived in Anoka, MN, where he worked for Sears from 1961-1973. He also served churches in Stacy, MN, Big Lake, MN, Georgetown, TX, and Moorhead. He stepped back into secular service as an independent contractor with Graebel Van Lines where he retired in 2002. During that time, he and Gail had many enjoyable vacations throughout most of the states and Canada. He also worked at the I-94 Weigh Station in Moorhead until 2020.

Larry enjoyed his retirement years immensely, being free to pursue many areas of volunteer service. He worked with the church, youth camp, AWANA clubs, Salvation Army and Youth for Christ among other avenues of service. Larry's love for the Lord and serving Him was the driving force in his life.

He loved to spend time with his family. His grandchildren were a special joy and blessing. He loved books, had a well-rounded library and was a student of history and biographies.

He was preceded in death by his parents; stepfather, Ed Klos; one brother, Kenneth; and brothers-in-law, Larry Radeke and Paul Olson.

Visitation will begin at 1 PM, with a Celebration of Life service at 2 PM, Tuesday, October 11, 2022, at Korsmo Funeral and Cremation Service, Moorhead. Larry’s service will be livestreamed, and that link will be placed on his obituary page on the Korsmo website.

Interment will be held at a later date at Orrock Cemetery, Big Lake, MN.

To order memorial trees or send flowers to the family in memory of Larry Larson, please visit our flower store.