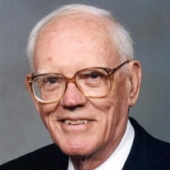 Kenneth W Covey, MD, died at age 96, Tuesday, June 28, 2016, at Eventide on Eighth, Moorhead, MN, surrounded by family and under the care of Hospice of the Red River Valley and the compassionate staff of Eventide.

Kenneth Wilbur Covey was born in Bagley, MN, August 4, 1919, to Margaret and Wilbur Covey. Ken was the middle of three children and was preceded in death by Grace Yvonne who died in infancy and Ruth Phyllis Covey who died in 2009.

Kenneth graduated from Bagley High School and attended Hamline University for undergraduate work and, because of WWII, was in an accelerated program for his medical degree at the University of Minnesota. He graduated from medical school in 1943 and interned at St. Barnabas Hospital in Minneapolis, MN, where he met the love of his life, Grace Elizabeth Hanson, who was an obstetric nurse at the hospital. They were married April 27, 1944, and moved to Mahnomen, MN, where Kenneth practiced family medicine for 11 years. During those years, he had a busy life with the addition of 5 children - Catherine, Elizabeth, Jane, Christine and Mark.

In 1955, Kenneth entered an orthopedic residency at Mayo Medical Center in Rochester, MN, and 3 years later moved to Crookston, MN, working for the Northwestern Clinic there. He practiced there until 1966 when he moved to Moorhead and continued his orthopedic practice until his retirement at the age of 67.

Ken had many interests and community services. He biked extensively throughout the Fargo/Moorhead area for work and for exercise. He participated in multiple Midwest rides with Jim Klobuchar and received a medal for 25 years of rides. He was often seen in his later years on his recumbent bicycle riding throughout Moorhead. He was an avid ham radio operator since age 18 and often helped with communication during many area emergencies, flooding, and during the trans-Atlantic voyage of the Hjemkomst.

He was a passionate spokesman for the medical care and advocacy for many people of the area. Ken worked many years with Dorothy Day House, Churches United for the Homeless, and the Salvation Army. Ken and Father Bill Mehrkens saw a huge community need and founded the Dorothy Day House of Hospitality more than 30 years ago. He helped set up a free clinic for the homeless and underinsured of Fargo/Moorhead and received an award from the city of Fargo for his efforts. He was an active member of the First Presbyterian Church of Moorhead since 1966.
In 1985, he received the Diehl Award from the University of Minnesota for his commitment to medical care and advocacy in underserved populations in Minnesota.

In 1992, Ken and Grace shared a McKnight Foundation Human Service award for their work in setting up housing, support, and free clinics for migrant workers, immigrants to the US and homeless people. Ken and Grace enjoyed 68 years of marriage and adventures before Grace's death in 2012.

The family would like to express sincere gratitude to the staff of 2nd Floor at Eventide for their gentle care and concern throughout Ken's illness.

Ken has requested that memorials be directed to the Dorothy Day House in Moorhead or the First Presbyterian Church of Moorhead.

Please join us in celebration of a man who had a truly remarkable life.

A memorial service will be held on Wednesday, July 13, 2016, at 11 AM, in First Presbyterian Church, Moorhead.

To order memorial trees or send flowers to the family in memory of Kenneth W. Covey, MD, please visit our flower store.