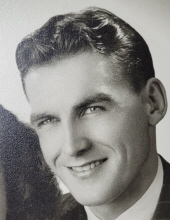 Ken’s father Olaf and a brother Willard, died from the flu pandemic when Ken was 9. At 13, he was already doing a man’s job in the summers working at neighboring farms to help support a large family. Ken dropped out of school in the 10th grade to work full time on local farms. Ken has many adventure stories about those years.

The day before Ken turned 18, he joined the U.S. Navy and was shipped off to boot camp in Farragut, Idaho. After completing additional training, Ken was assigned to PT Boats in the Philippine Islands. Ken tells many harrowing stories about his wartime experience, justly earning him the title of the “Greatest Generation.” In 1946, Ken was discharged and returned to Mayville, ND, where he used the GI Bill to learn auto mechanics and start a successful 45 year career.

In 1947, he spotted a good looking girl walking down the steps of the YMCA and told his companion, “that’s the girl I am going to marry” and so he did. Ken and Luella Jean Hein were married October 11, 1947. Ken loved to hunt and fish. With his trusty Mauser Rifle he spent over 60 continuous years hunting Minnesota deer. Ken and Luella purchased a Lake Ida lot and built a cabin which provided many hours of relaxation, fishing, and swimming.

After retirement from the mechanic profession, Ken worked for the Fargo Parks Department in the summers and spent winters in and around Parker, Arizona. During a Devils Lake, ND, fishing trip, Ken’s children surprised him with a trip to the Mayville High School, where he was awarded a High School Diploma. Ken attended area Lutheran churches and trusted his Lord and Savior Jesus Christ. With 5 little kids in tow and dressed in Sunday suits, it was quite the sight.

After the years made them slow down, Ken and Luella moved into a Moorhead, MN apartment. Ken hunted and fished until it became too difficult to get around, but his spirit was always in the outdoors. It would not be a fabrication to say Ken didn’t live one life but at least two or three, and all to the fullest!

Memorial Service for Ken will be Wednesday, November 2, 2022 at 10:30am in Korsmo Funeral and Cremation Service. Interment will be in Fargo National Cemetery with full military honors. Ken’s Memorial Service will be livestreamed here on his obituary page.

To order memorial trees or send flowers to the family in memory of Kenneth O. Olson, please visit our flower store.