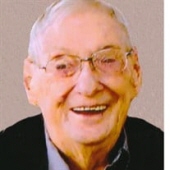 Ken was born on September 8, 1924, in Neche, ND, to Francis and Ellen (Cook) O'Leary. He graduated from Neche High School in 1942, and soon after enlisted in the US Army. Ken served for 3 years, 1 month, and 24 days in China-Burma-India.

Following service to his country, Ken returned to North Dakota where he worked in the lumber business. While in Fordville, ND, he met Mildred Hylden whom he married in 1952. Kenny and Millie lived happily with their four daughters in rural Fargo until Millie's untimely death from cancer in 1971. In 1977, Ken married Frona Gallagher of Moorhead. He worked for Dacotah Paper Company for 38 ½ years, serving his customers with honesty, integrity, and humor. Ken shared his love of life and compassion with all he met.

Ken was preceded in death by his parents; his first wife, Millie; his twin sister, Dot; and five brothers, Mark, Francis, Alfred, Arnold, and Pat.

Memorials, in lieu of flowers, may be made to Hospice of the Red River Valley.

To order memorial trees or send flowers to the family in memory of Kenneth J. O'Leary, please visit our flower store.