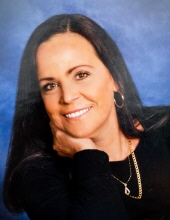 Kelly Marino was born on Midway Island, the daughter of Frank and Imogene (Kirkland) Marino. She often referred to herself as a “navy brat” as her father’s career took the family to several naval bases in the Pacific and on the west coast. While living in California, Kelly gave birth to daughter Cori.

Kelly was united in marriage to Keith Anderson on December 1, 1990, in Jacksonville, FL, where they met. They initially made their home in western Wisconsin, then moved to Fargo, where they have resided the past 20 years.

Kelly worked in a variety of careers during her lifetime. She spent many years at Royal Jewelers in Fargo, and for the past ten years at Blue Cross and Blue Shield.

She is survived by her husband, Keith; daughter, Cori (Ryan) Reali of Eau Claire, WI; brother, Christopher Marino; and many family and friends.

She was preceded in death by her parents, Imogene and Frank Marino Jr; and her in-laws, Edward and Norma Anderson.

Visitation for Kelly will begin at 1 PM, with a Celebration of Life service at 2 PM, Saturday, August 20, 2022, in Korsmo Funeral Chapel, Moorhead. Burial will be at a later date.

To order memorial trees or send flowers to the family in memory of Kelly Marie Anderson, please visit our flower store.