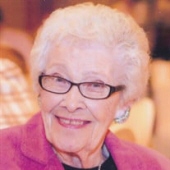 Kathlynn Yvonne Ystebo was born February 14, 1929, to Sigve and Josephine (Stole) Ystebo, in Crookston, MN, and spent her childhood on the family farm near Shelly, MN. She graduated from high school in Climax, MN.

Kathlynn married Edgar P. Anderson on December 28, 1946, in Shelly. They lived in various communities in South and North Dakota where Edgar coached and taught school. She was a real fan of his many teams and was an "excitable" cheerleader. Her main focus, however, was on their four children and creating a loving home. Kathlynn enjoyed making delicious meals, baking, sewing, reading, and crossword puzzles. She put her cooking skills to work by serving as a cook and kitchen coordinator at Red Willow Bible Camp for many years.

In 1969, she and Edgar moved to Freeport, IL, where they lived until 1986, when they moved to their lake home near Frazee, MN. Once again, she encouraged family activities and treated their guests to her outstanding cooking. They moved to Moorhead, MN, in 2001, and Edgar died April 22, 2001.

She appreciated the visits from family and friends and the chance to exercise her culinary skills. Throughout the years, she belonged to numerous organizations in the community, including card clubs, homemakers, ladies aid, and Eastern Star. She was a gracious hostess, a believer in the importance of family, and of course, a great cook.

Kathlynn passed away at her home in Moorhead, on Tuesday, October 13, 2015, at eighty-six years of age.

In addition to her husband, Edgar, Kathlynn was preceded in death by her parents, and her youngest daughter, Valorie.

A memorial service will be held Saturday, October 17, 2015, at 11AM, in Lutheran Church of the Good Shepherd, Moorhead. Visitation will begin at 10 AM, at the church. Burial will be in Zion Lutheran Cemetery, Shelly, MN.

To order memorial trees or send flowers to the family in memory of Kathlynn Anderson, please visit our flower store.