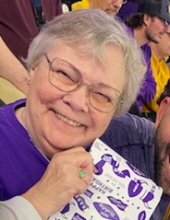 Kathleen Shirley Berg was born, December 9, 1949, in Ortonville, MN, the daughter of Charles and Shirley (Stenstadvold) Berg. Since her father worked for the railroad, Kathy lived in several places when she was young and graduated from Breckenridge (MN) High School in 1968. She then moved to Moorhead where she attended Moorhead Technical College receiving a degree in Office Administration. Kathy then went to work for Moorhead High School, working as an Audio-Visual Assistant.

On November 25, 1972, she was united in marriage to Jerry Wetterlin in rural Glyndon, MN. They established their home on a farm near Glyndon where Kathy assisted on the farm and, as an early farm wife, drove truck with much protest. She later went to work for the United States Postal Service and worked as a rural mail carrier for twenty plus years retiring in 2011. Kathy took great pride in providing the best service to everyone on her mail route.

She was a member of Scandia Lutheran Church in Averill, MN, where she taught Sunday School. Kathy also bowled on the Moorhead Teachers League for a number of years, and coached softball when her children were younger.

Kathy had a huge heart and loved first and foremost her kids, grandkids and grandpuppies. Kathy loved spending time with her “Triple A” grandkids. Having a special bond with each. Adam, the oldest, would have many, many phone conversations with grandma, sometimes multiple times a day. Alex, whom Grandma loved her Subway’s lunch dates and all the hugs she could get. Alex teased her often about how short she was. Andrea, the youngest and only girl was the only one allowed to call her ‘Graham Cracker” and liked to diamond dot with Grandma. Grandma had many “conversations” with her grand puppies, peanut butter toast and popcorn were favorites to share with them.

Kathy loved Diet Coke and was known to give most of the babies in the family their first taste unbeknownst to their parents. She also loved popcorn, Snickers and hugs. She enjoyed ceramics, which she taught for many years, crocheting, diamond dotting and made the BEST chocolate chip cookies. Kathy had a love of crocheting and often shared her creations with her family, friends and others in need of a warm hug. Numerous baby blankets were made, as well as afghans and doilies. Kathy especially loved to travel and had many opportunities with her “Golden Girl house mate”, Deb. She and Deb went on several road trips. Kathy traveled throughout the United States, including, Alaska, Hawaii, Washington DC, New York City, Las Vegas, and all four countries of the United Kingdom.

She was preceded in death by her parents, Charlie and Beany Berg, Shirley and Sam Saunders; sister, Debbie Hansen; and brother, Richard Berg.

To order memorial trees or send flowers to the family in memory of Kathleen S. Wetterlin, please visit our flower store.