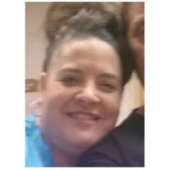 Julie Ann LeBlanc was born September 8, 1967 to Roland and Carole. She grew up as an only child with her mother Carole and her grandmother Inger in Moorhead,. Julie graduated from Moorhead High School in 1986. She then pursued her nursing degree through Northwest Technical College now known as Minnesota State Community and Technical College, Detroit Lakes, MN.

Julie worked as an LPN for most of her career at Moorhead Heathcare Center (Golden Living Center). While there she made many friendships with many who would become family to her and still remained to this day. She also worked at Eventide as a PRN nurse for a few years. She later branched out and worked at Clay County Detox, but all who knew her knew her heart would always be in geriatrics.

Julie had a heart of gold and would give the shirt off of her back for anyone in need. She had an amazing taste in shoes and purses, and an even better taste in her close circle of friends. She would start a conversation or text, with 'How are you?' and end it in, 'I love you, take care!'

Julie will be deeply missed by her close circle: her husband, Hamid; Rhiannon Walstrom and her family, who Julie always asked about, said how much she loved and said were her second family; Marilyn & David Walstrom; Brandi, Dana, & Alanna Carlson; Swen, Jill, Isaac, & Owen Walstrom; Brian Brogren and Greg Stopke who were always there for Julie, whether it was for car rides to doctor appointments, med pick-ups, or to the grocery store. They always had each others' backs and were lifelong friends. Tony Dillard was also there to help Julie, he was her rock for many years after the passing of her mother and grandmother and has been ever since.

Finally, to all the past staff at Moorhead Healthcare; In many conversations with Rhi she often mentioned just how much all of you touched her life. You all know who you are.

A Graveside Service for Julie will be Friday, October 30, 2020 at 3:00 PM, in Aspelund Lutheran Cemetery, rural Flom, Minnesota.

To order memorial trees or send flowers to the family in memory of Julie A. Laaouina, please visit our flower store.