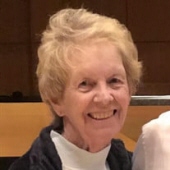 Judy Ann (Berquam) Buscher was born July 10, 1941 to Frances (Carney) and Eugene Berquam in Moorhead, MN. She was raised on 13th St S. in Moorhead. She had an amazing group of lifelong friends from her childhood that she was in contact with for her entire life. She attended St. Joseph Catholic School where, at age six, she discovered music, the greatest of her many passions. She began piano lessons and at the young age of ten, became St. Joseph's organist/pianist, which she continued till her death.
Judy attended Moorhead High School and graduated as class valedictorian in 1959. She then attended Moorhead State University, graduating in 1968 with a major in Business Administration and accounting. While attending college, she became a member of Beta Chi Sorority and made more life-long friendships with her "sisters".

Judy was united in marriage to Roger Buscher on October 17, 1964, at St. Joseph in Moorhead. From this marriage two children were born: Peter in 1966 and Allison in 1973.

Judy began working at Northwestern Bell while she was in high school. She continued with them until the early 1980s, when her department was relocated to Minneapolis. She also taught dance at the Arthur Murray studio in Moorhead. She used her musical talent to play for numerous events around Fargo-Moorhead. For many years she played piano at Shakeys Pizza in Fargo with her two brothers, who played banjo. Judy stayed home for some years with her children and then went back to work in the insurance industry, first with Clay Insurance Agency and then with Moorhead Insurance Agency.

Judy also had a passion for sports. She loved the Moorhead State Dragons and was particularly interested in the men's basketball program due to her close friendship with the head coach Dave Schellhase and his wife Wendy. Judy help found the Dunkin' Dragon men's basketball fundraising/fan organization. As someone who never played sports and was always the last one picked for any team she said, her passion for the program at Moorhead State drew attention and in 1996 Judy was inducted into the Moorhead State Athletic Hall of Fame for her distinguished service. Basketball wasn't her only love for sports. She watched the Twins, cheered loudly when they won the World Series, followed PGA golf, had her heart broken over the Vikings, donned the green and gold for the NDSU Football team and absolutely loved watching ATP tennis. Through all the years, Judy followed the career of Andre Agassi, as he reminded her of her son Peter, who was a tennis player.

Judy's passion for volunteering began as a child and continued until her death. The church was the first place she started. She ran the kitchen for many years for the annual fall bazaar where they served a "from scratch" turkey dinner. She was instrumental in the organization of the Charitable Concerns committee to provide help to those in the community. She was president of Catholic Daughters, President of the Stewardship committee, on the Liturgy Committee, and served as parish council president. She also made time to volunteer for the MN Special Olympics.

Her piano playing will be remembered by thousands. We can't even begin to count the number of weddings, funerals, and regular church masses she played for. We do know that she was involved in them for almost 70 years. She always said that God gave her this talent and it was her honor to share it with the church. Judy was involved in four choirs at St. Joseph's: The Children's Choir, Men's Gospel Choir, Adult Choir, and the Resurrection Choir. She also had numerous friendships with individual soloists who sang for weddings.

Judy had a passion for travel. She loved being adventurous and went whenever the opportunity arose. In her last 40 years of life she checked many items off her travel bucket list including, the Oregon Coast, an Alaskan Cruise, Cayman Islands, Jamaica, Argentina, England, Scotland, Wales, and Hawaii and Mexico numerous times. She was a great travel partner and all who were with her loved her company. Judy was known for her annual trips to Las Vegas with Allison. Over the years she saw numerous shows she enjoyed and had many fine meals along with leaving a few dollars to the town. Every summer she looked forward to the Berquam Beartooth Roundup, which was held at her brother Skip's cabin in Montana. During the first part of July, family and friends would gather there for campfire, music, fellowship, and the natural beauty of the place. This was her one set trip every July since 1986. Before her passing she was able to be there this year. She also found a second home for the month of March every year as she travelled to Sun City, AZ, to stay with her brother Skip and his wife, Holly. From her years there she made more friendships and had a break from the ND winters.

Judy's passion for her family was her strongest. She loved her children fiercely and when her son Peter tragically left this world in 1986, she was still a loving mother to Allison even though her heart was breaking. When Allison was younger, Judy spent countless hours at swim meets, softball games, Advent programs, and any other event Allison was involved in. Her love for her family grew when Allison married her husband Wayne, and she welcomed him into the family. When her precious grandson Matthew was born, Judy's love only grew more. She loved that little boy with all her heart. Grandma was always able to help babysit, drive him places, spoil him, and returned to spending countless hours watching her grandson's sports, activities and his high school graduation. Judy was exceptionally proud of Matthew being the 4th generation to attend St. Joseph's Catholic School as her mother Fran did, she did, her daughter Allison went, and finally Matt.

The last six years of her life, Wayne, Allison, and Matt had the privilege of having Mom live with us. If it was possible, the three of us loved her even more. She was a welcoming face when we returned from work, was always available to discuss sports with Wayne, made the bond between her and Allison stronger, and saw Matt grow from a middle school student to a soon-to-be college freshman. Judy was a remarkable woman with a memory that went on forever. Every morning she did the crossword puzzle in pen, something she continued through her whole life. She was a voracious reader and her collection of books over the years numbered in the thousands. When trivial pursuit was the craze, everyone wanted her on their team as she would be the only one to know the answers to those obscure questions.

From the day she was born we knew she was on loan from God. She left a footprint on this earth and will be remembered by many for all the passions in her life. When she became ill the beginning of July, the Lord knew she was tired and called her home. When she left this earth at 11:15 PM on July 29, 2020, she was surrounded by prayers, singing, and love.

She is lovingly survived by her daughter, Allison (Wayne) Miller, Fargo; brothers, Bill Berquam, Moorhead, and Skip (Holly) Berquam, Spokane, WA; nieces, Jennifer (Todd) Hocking, Fargo, and Sarah Berquam (Mark Altenburg), Moorhead; nephews, Mike (Carly) Berquam and Scott (Mariah) Berquam, both of Spokane; her very treasured and loved grandson, Matt Miller, Fargo; one great-nephew, Mitchell Hocking; and one great-niece, Aurora Berquam, along with numerous cousins; sister-in-law, Judy Berquam; and her weekly therapist/hairdresser and close friend, Kay Litch, who made my mom beautiful every Tuesday, including the day before her passing.

We would also like to thank Essentia Health for their compassion and care for my mother in her last hours. We also thank Julie Hardmeyer, Anna Goodin-Hayes, Fr. Nate Brunn, Fr. Larry DeLaney and everyone in the St. Joseph parish community who loved my mother, prayed for her and were there to support our family as she passed.

Current CDC guidelines will be followed for the visitation, prayer service and Mass.

To order memorial trees or send flowers to the family in memory of Judy A. Buscher, please visit our flower store.