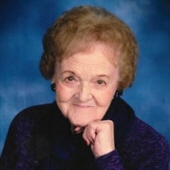 Joyce Isabel Janet Lawson was born April 2, 1926, in Saskatoon, Saskatchewan, Canada, to William Harrison and Alice Bernice (Ringland) Lawson. She moved with her parents to Concrete, ND, when she was six months old. Joyce grew up and attended schools in North Dakota, graduating from the University of North Dakota at Grand Forks, with a B. S. degree in Education, Nutrition and Dietetics.

She had a passion for teaching which began in one-room country schools. Her teaching career included elementary and secondary schools in North Dakota, California, and Minnesota. Her gift of teaching passed on a love of learning to generations of young students and put them on the right path in life. Her deep faith, which she lived every day, was an important part of her life.

On August 4, 1950, Joyce married Vernon Strand in the President's House on the University Campus at Grand Forks. Rev. C. Maxwell Brown officiated. After their marriage they lived in Grand Forks, Turlock, CA, Hillsboro, ND, and Wolverton, Hendrum, Glenwood, Taylors Falls, Rush City and Moorhead, all in Minnesota. They moved to Moorhead in 1966. Joyce was a Substitute Teacher Coordinator for Moorhead Schools at the time of her retirement June 30, 1992.

Vernon and Joyce enjoyed traveling. Their most memorable trips were to England, Scotland, Norway, and Atlanta, GA.

She is survived by her five children, Kitty (David) Howland, Monte Strand, both of Moorhead, JoEllen (Ron) Johnson, of Battle Lake, MN, Don Strand, of Moorhead, and Meribeth Balsdon (Daryl Havens) of Langdon, ND; sister-in-law, Shirley Lawson of Laurel, MT; brother-in-law, Rev. Bruce Buller of Rochester, MN; thirteen grandchildren; and many great-grandchildren, nieces and nephews. Her family was her pride and joy!

We cherish her memory and celebrate her life.

Visitation will be from 12 noon to 1 PM, with a funeral at 1 PM, Friday, March 22, 2019, in Our Savior's Lutheran Church, Moorhead. Burial will be in the spring in Arnegard Cemetery, Hillsboro, ND.

To order memorial trees or send flowers to the family in memory of Joyce Strand, please visit our flower store.