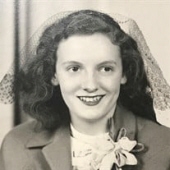 Joyce Emily Ramey, the daughter of George and Goldie (Joyce) Ramey, was born in Williston, ND, on Sept. 17, 1928. She grew up and received her education in Minot, ND, and was married in Minot on Sept. 19, 1946, to James Landphere.

The couple first lived in Minot, and later moved to Moorhead, and in 1953, to Fargo, ND. They lived in several other places prior to returning to Moorhead in 1992. Her husband, James, died in July of 2015. In 2016, Joyce became a resident of Emmanuel Nursing Home in Detroit Lakes, where she had lived since.

A memorial service for Joyce will be held on Wednesday, November 7, 2018, at 11:30 AM in Korsmo Funeral Chapel, Moorhead.

To order memorial trees or send flowers to the family in memory of Joyce Landphere, please visit our flower store.