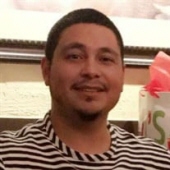 José Angel Silva was born on December 17, 1987, to Cynthia (Hernandez) and José Salvador Silva, in Fargo, ND. José, who went by his middle name Angel, grew up in Dilworth, where he went to school. He completed his secondary education and attended college at Minnesota State Community and Technical College. Angel eventually became a truck driver for Richards Excavating where he worked up until his passing.

Angel had many interests and hobbies, but the thing he enjoyed the most was spending time with his family and friends. He loved reading books to his son, Adrian on a nightly basis. Angel often would travel to Texas and the Twin Cities to visit relatives. Family was Angel's passion and he was always striving to be the best father and provider for those around him. The one thing that stood out about Angel was that he was always smiling and happy.

Angel had a very social personality and loved traveling. In his younger years he participated in boxing and karate, which lead to his love for UFC and mixed martial arts. Angel had an interest in history and liked to debate conspiracy theories.

A Visitation for Angel will take place on Sunday, December 22, 2019, from Noon to 1 PM, with his Memorial Service at 1 PM, in Korsmo Funeral Chapel, Moorhead, MN.

To order memorial trees or send flowers to the family in memory of José Angel Silva, please visit our flower store.