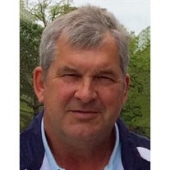 Jon was born August 10, 1956, to Robert and Nancy (Haverick) Lundborg, in Montevideo, MN. He was raised in Milan, MN, graduating from Milan High School. After graduation Jon served in the U.S. Army. He was honorably discharged and moved to Moorhead, MN, where he graduated from Moorhead State University.

Jon began working as a salesman for Johnson Brothers Liquor Company in 1987 and would remain with the business until his retirement in 2018. In his time with Johnson Brothers, Jon won a number of awards, including Salesman of the Year.

Jon was an avid golfer and made many friendships on the golf courses of Moorhead, Fargo, ND, and Hawley, MN. In addition to golf, Jon loved fishing, reading, and watching Minnesota sports. Jon was a fan of every type of music, keeping his tastes in tune with the times, and particularly loved attending concerts and live shows. Jon loved spending time with his family and enjoyed making them laugh.

Jon is survived by his wife, Shelley; his children, Abby and Jacob; his siblings, Barbara (Chris) Glasoe, Richard (Kim) Lundborg, Joanne Lundborg; and many special nieces and nephews. He was preceded in death by his mother, Nancy; his father, Robert; and two infant daughters, Hannah and Rachel.

Jon was a beloved husband, a fantastic father, a caring brother, and a loyal friend. His quick wit, independent thought, and generosity of spirit will be missed. His absence will be felt by all who knew him.

A Gathering of Friends for Jon will be Wednesday, 5 PM to 7 PM in Korsmo Funeral Chapel, Moorhead.

His Memorial Service will be Thursday, May 16, 2019, at 11 AM in Bethesda Lutheran Church, Moorhead.

To order memorial trees or send flowers to the family in memory of Jon P. Lundborg, please visit our flower store.