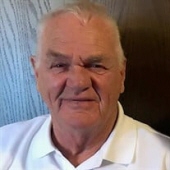 John was born July 18, 1934, in Northwood, ND, to Adolph and Margit (Haugland) Ostlie. He graduated from Hatton (ND) High School and soon after, entered the U.S. Army. After his service, he attended and graduated from Valley City (ND) State University and later earned a Master's degree in Counseling from North Dakota State University, Fargo, ND.

In 1960, John married his bride of 53 years, Joan Kruschwitz, and they made their home in Moorhead. After seven years teaching elementary school, John spent the majority of his career as the Moorhead Jr. High School counselor until he retired in 1996.

John was a long-time member of Grace United Methodist Church, Vikingland Kiwanis, American Legion and the Sons of Norway. He was a special community servant serving numerous events wherever he was located.

John was preceded in death by his wife, Joan; son, Phil; and sister, Julie Keidel.

Visitation will be Saturday, January 5, 2019, from 9:30 - 11 AM, followed by a memorial service at 11 AM, in Grace United Methodist Church, Moorhead. Inurnment will take place at Riverside Cemetery Mausoleum, Moorhead.

To order memorial trees or send flowers to the family in memory of John Ostlie, please visit our flower store.