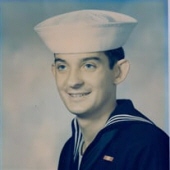 John Wayne Murphy was born May 25, 1952, in Moorhead, MN, to Roy and Bernice (LaFay) Murphy. He was raised in Moorhead where he graduated from high school. John served in the US Navy, aboard the USS Wallace L. Lind, and returned to the area following his discharge. John married Jeanne Konkler and they made their home in Oakes, ND.

John moved to West Fargo, ND, in 1993, and worked as a foreman for Mid-States Truss, in Fargo, ND.

Visitation will begin at 1 PM, followed by a Celebration Service at 2 PM, Wednesday, October 22, 2014, in Korsmo Funeral Chapel, Moorhead. Inurnment will be in St. Joseph's Catholic Cemetery, Moorhead.

To order memorial trees or send flowers to the family in memory of John Murphy, please visit our flower store.