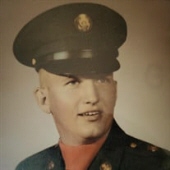 John entered the US Army in 1965. He joined the North Dakota Air National Guard in 1972, and retired as Master Sergeant after thirty-one years of combined service. John served active duty during Desert Storm and Desert Shield.

He married LaVaughn Hanson on April 24, 1971, in Moorhead, where they made their home. John was very active in the Moorhead American Legion where he served many years with the color guard. In his younger years, John enjoyed boxing.

With his family by his side, John died peacefully in RiverPointe memory care unit, under hospice care, at seventy-seven years of age.

In addition to his parents, he was preceded in death by a brother, Thomas "Buddy"; and a sister, Gail Cain.

A private family service will be held with a public memorial service to be held at a later date.

Events Details are pending.
To order memorial trees or send flowers to the family in memory of John L. Carney, please visit our flower store.