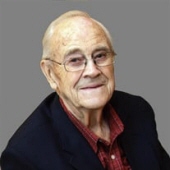 John Henry Eide, 94, passed away peacefully, surrounded by his family, on Saturday, March 23, 2019, at Eventide on Eighth in Moorhead, MN, after a brief battle with cancer.

John was born November 15, 1924, to Edward and Elizabeth (Hauge) Eide in Rothsay, MN. John grew up on the family farm near Carlisle, MN, with his two brothers and two sisters. He graduated from Fergus Falls (MN) High School.

He married Beverly Boen on May 30, 1948. Together they had three children - Bradley, Richard and Meridee. They began their married life in Fergus Falls, followed by several years in Bloomington, MN, before finally settling in Moorhead in 1962.

Patience, hard work, pride and love for his family were his strongest virtues. His first love was Bev and his children, followed closely by family relations. There were many family gatherings at the homestead farm in Carlisle and also at the nearby Sether homestead farm. He will be remembered as a kind, loving, and encouraging father and grandfather, who showed by example, what to strive for as a human being; to be loyal to those you love, to show kindness to others, to be considerate, and to be strong for those surrounding you that need you.

His days were full, beginning with morning coffee gatherings, various bridge groups, the YMCA for a sauna, and evenings for local high school games, especially football and basketball. He enjoyed traveling the country with Bev in their motorhome, woodworking, golf, playing cards, model railroads, pancake feeds and just eating out, because "I don't like to cook and I don't like what I cook!" He enjoyed working with his hands and creating something that would bring joy to others. The diversity of his work was impressive, from finishing basements in his various homes, to wood toys, or bookcases for his family, and to the ultimate toy a Great-Grandpa could make, an M&M candy dispenser.

Another passion of John's was going to an annual Lutefisk dinner at a local church, and who doesn't love a good Lutefisk dinner? Well, unfortunately, it is an acquired taste for most people. However, John could show up to the dinner with as many as 20 family members. He could entertain a room with his stories. Generally, the stories wouldn't begin until he had a toothpick in hand, but when he talked, everyone listened; whether it was stories of his childhood on the farm, the travels he took with his wife, Bev, his love of trains, or simply the newest joke/riddle he knew. John will be remembered for his warmth, kindness, interest in others, his easy smile, wry sense of humor and well timed jokes.

To order memorial trees or send flowers to the family in memory of John H. Eide, please visit our flower store.