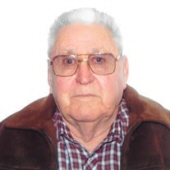 John Eugene Kreps was born October 8, 1927, in Moorhead, MN, to C. Wayne and Anna (Hanson) Kreps. John was raised in Moorhead where he received his education.

John served in the Merchant Marines for a time before enlisting in the US Army on October 23, 1946. He was honorably discharged on April 14, 1948, and returned to the Moorhead area. John worked as foreman for Paul Horn Farms, Inc., for many years before driving a truck for Silverline Boats.

John married Wanda Wendt, May 27, 1949, in Moorhead, and they both worked at the State Hospital in Fergus Falls, MN. John worked as a groundskeeper. He then managed Wee Villa Resort on Long Lake, near Fergus Falls.

In addition to his wife and parents, John was preceded in death by his siblings, Wayne Kreps, Helen Motschenbacher, and Virginia Diniceli.

There will be a private family graveside service, with full military honors, at Riverside Cemetery, Fargo.

To order memorial trees or send flowers to the family in memory of John E. Kreps, please visit our flower store.