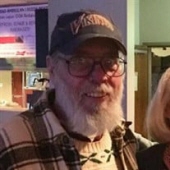 John C. Rott, 70, of Moorhead, MN, died Thursday, September 24, 2020, in Bethany Retirement Living on University, Fargo, ND, under the care of Bethany Staff and Hospice of the Red River Valley, with family members by his side.

John Cole Rott was born December 1, 1949, the son of Glen and Alice (Donahue) Rott, in Fargo. He grew up in Fargo and Moorhead and graduated from Shanley High School. In the early 1970's John served in the United States Army and then worked at American Crystal Sugar in Moorhead for 35 years, retiring in 2012.

A trip to Germany with his mother started his passion for collecting and he loved going to antique and thrift stores. John would find out what his family members were interested in and then scour the stores to find little treasures for them.

In retirement, John enjoyed playing Bingo and was a regular at Vic's and the American Legion in Moorhead and was a loyal Vikings and Twins fan. John was also a Trivia wiz and you knew if he was on your team you were probably going to win.

He is survived by his sisters, Katy (Mike) Selberg, Susie (Rod) Lang, Julie (Gene) Rajpolt, and Amy (Mark) Steffens; along with numerous nieces and nephews.

He was preceded in death by his parents and a niece, Megan Lang.

John will be missed by his family and many friends.

In memory of John, memorials may be directed to the FM Coalition to End Homelessness at www.fmhomeless.org.

A Private Family Graveside Service with Military Honors will be held in Riverside Cemetery, Fargo.

To order memorial trees or send flowers to the family in memory of John C. Rott, please visit our flower store.