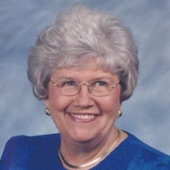 JoAnn Ogard was born on January 31, 1934, at the home farm south of Hendrum, MN, to Alfred and Tracy (Hviding) Ogard. She graduated from Hendrum High School in 1952, as Valedictorian. She moved to Fargo, ND, to work at the Fargo Clinic.

She married Arne Strom on September 26, 1953, after winning their first car at the Ada Fair. With Arne still in the Navy, they moved to Arlington, VA. Their daughter Teresa was born at the Bethesda Naval Hospital in Maryland on July 6, 1954. Arne was discharged from the Navy in May of 1955, and they moved back to Moorhead, MN. Ginger was born on June 11, 1956, and Bradley Allan on January 26, 1960.

Arne and JoAnn worshipped and served the Lord at Triumph Lutheran Brethren Church in Moorhead. This was a big part of their lives socially, emotionally, and spiritually. The fellowship was wonderful and they grew in the knowledge of their Lord and Savior, Jesus Christ, and the promise of eternity in Heaven. They loved their children and grandchildren deeply, attending many a ballgame and concert. They felt it extremely important to instruct their children and grandchildren in the Lord as well. JoAnn's hobby was keeping her family genealogy. She worked for Dr. Ron Kolb, D.D.S., as church secretary at Triumph Lutheran Brethren Church, as deputy treasurer at Clay County Courthouse, and for Larry Binford Construction.

A service will be held at a later date.

To order memorial trees or send flowers to the family in memory of JoAnn Strom, please visit our flower store.