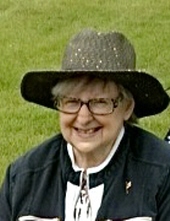 JoAnn (Thompson) Orvedahl was born April 14, 1945, in Sioux Falls, SD, to Joseph and Helen (Nelson) Thompson. JoAnn and her family spent her early years in eastern South Dakota where her parents were school teachers. From there they moved to Moorhead, MN, where JoAnn, her brother James, and their mother lived at her grandparents’ farmstead on the banks of the mighty Red River south of Moorhead, where her grandfather, Ernest Nelson, managed a large farm.

JoAnn developed a love for music at a very early age, no doubt influenced by her father and grandfather who were both accomplished high school band directors in eastern South Dakota. As a young woman she traded her beloved saxophone, given to her by her father, for a piano. She became a skilled piano player and loved to play all genres of music. Later in life, she gave piano lessons to countless students. Teaching piano was a source of pride and great joy for JoAnn. The piano remained her most beloved past-time and she continued to play as long as her health would allow, which was up until a few years ago.

JoAnn attended Moorhead State College Campus School where she met her future husband, Dennis Orvedahl. They were married September 1, 1963, and lived in the Moorhead, MN, area for 6 years before moving to Elbow Lake, MN. It was while living in Elbow Lake that they raised their four children.

JoAnn gave her heart to the Lord in the 1970s during a Billy Graham crusade. Her faith became a large part of her life. She enjoyed reading her Bible and praying that God’s blessings would be upon her family and friends, as well as anyone she discovered was in need. Her faith was with her up until the very end, when in her last hours she said, “I love my Bible.”

In the early 1990s, JoAnn moved back to Moorhead, where she lived with her mother for a short time before moving into Sharpview Apartments in Moorhead. This was her home for more than 25 years. She looked forward to visits from family and friends. These visits usually included at least one very competitive game of Scrabble, which she usually won.

As JoAnn’s health started to decline she was moved to the Fairmont Assisted Living Facility in Moorhead. Her time there was affected negatively by the COVID lockdowns as she was not able to receive visitors for many months. After a year at The Fairmont, she moved to Eventide Fargo where she lived for two years until her passing.

She loved looking at her digital picture frame that constantly showed her pictures of the daily lives of her children and grandchildren and she especially treasured all pictures of them with her. She loved to receive flowers and simple gifts on special occasions and was always so appreciative and thankful. While at Eventide, she became a very enthusiastic NFL, NBA, MLB and NHL sports fan. She knew all the latest news and enjoyed “talking sports” with her brother Jim, on the phone.

JoAnn passed away Tuesday, July 26, 2022, at Sanford Medical Center in Fargo, ND, in the presence of family. She was 77 years old.

JoAnn was preceded in death by her parents.

Visitation for JoAnn will begin at 9 AM, with a Life Celebration service at 10 AM, Saturday, August 6, 2022, in Korsmo Funeral Chapel, Moorhead

To order memorial trees or send flowers to the family in memory of JoAnn Orvedahl, please visit our flower store.