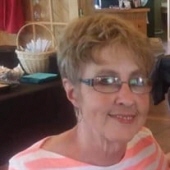 To view JoAnn's Funeral Service via livestream on Friday, January 28, 2022, at 1pm, please click on the link below:
https://portal.memoryshare.com/memoryshare/videoplayer/joannk-block-8121706


JoAnn K. Block, 76, Detroit Lakes, MN, died Monday, January 24, 2022, at her residence under care of Hospice of the Red River Valley.
JoAnn Kay York was born February 12, 1945, in Detroit Lakes, MN, to Cecil and Gertrude (Dorff) York. As a young girl she attended country school near Audubon, MN and later Detroit Lakes. In the summer of 1969, JoAnn was united in marriage to Norman Branden. They later divorced. On October 15, 1988, JoAnn was united in marriage to Brian Block. They made their home in Detroit Lakes. During her working career, JoAnn was a cook at the 59'er, Audubon Truck Stop, Pikes Bay Café, and Grovers Lindberg. For a short time, she worked at Big Daddy's Tesoro until she retired.
JoAnn was known for her cooking and baking at every restaurant she worked. She enjoyed watching old westerns on TV, shopping with her daughters, especially garage sales, collecting knick-knacks and visiting with family and friends over a cup of coffee. JoAnn loved her family, her grandchildren, and had a special place in her heart for all animals, especially dogs.
JoAnn is survived by her husband, Brian Block; children, Jim Branden, Jeff (Kris) Branden, Tammy (George) Mattson, Wayne Branden, and Lisa (Paul Austin) Branden; 14 grandchildren, 25 great-grandchildren; along with her siblings, Wayne (Kathy) York, Julie Taylor, LaDonna Olmstead, Kevin (Eva) York, Susie (Steve) Piper, and Culleen (Cameron) Harthun; and her special fur baby, "Tigger."
She is preceded in death by her parents; two granddaughters, Kirstan and Faith; and two brothers-in-law, Rod and Mark.
Funeral Service for JoAnn will be Friday, January 28, 2022, at 1pm in Lake Eunice Evangelical Free Church, rural Detroit Lakes, MN. Visitation will be one hour prior to the service. Burial will take place in the spring of 2022.

To order memorial trees or send flowers to the family in memory of JoAnn K Block, please visit our flower store.