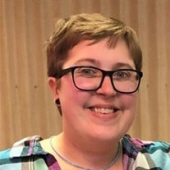 Jessica Jo Donahue, 30, of Moorhead, MN, died on Saturday, January 5, 2019, in Essentia Health, Fargo, ND, surrounded by many who loved and cherished her. On January 31, 2014, she was diagnosed with a Right Frontal Lobe brain tumor, later confirmed that it was an Anaplastic Oligoastrocytoma stage 3 (later name changed to Anaplastic Astrocytoma stage 3), an aggressive tumor. She was courageously undergoing infusion chemotherapy every two weeks. As Jess would say "Weakness is not an option."

Jess was born January 3, 1989, in Fargo. She grew up on a farm outside of Georgetown, MN, until her family moved to Moorhead in 2001. Jess attended Moorhead Public Schools, graduating in 2007 and continued her education at Moorhead State Community & Technical College. She then received an Associate of Applied Science degree in Graphic Design and a Certificate in Photography and Digital Imaging. While attending school, Jess worked at McDonald's and was later hired at Mathison's as a Graphic Designer. She later went back to work at McDonald's due to her love of working directly with customers.

Jess greatly enjoyed spending time with her family and friends. Her fur babies, Pink, Shadow and Potter were her passion. She loved to read, listen to music, dance, attend concerts, camping and the outdoors, and especially painting and drawing. Jess was also a Minnesota Wild hockey fan, as well as a Minnesota Twins baseball fan. She was known for her infectious smile, being kind, caring, compassionate and loyal with a kind gentle spirit.

Jess was preceded in death by her great-grandparents; friends, Brittany Buckley and Dane Tvedt; and her family fur babies, Suzi Q, Roger, Lady, Milo and Chester.

Jessica Jo Donahue will be greatly missed and will live in our hearts forever, along with all the wonderful memories we were blessed to share with her.

A Gathering of Friends for Jessica will be Friday, January 11, 2019, from 5 PM until 7 PM, with a Service of Remembrance at 7 PM, in Korsmo Funeral Chapel, Moorhead.


To order memorial trees or send flowers to the family in memory of Jessica Jo Donahue, please visit our flower store.