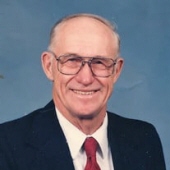 Grandpa Jerry, as he was best known, was born January 2, 1931, in Deisem, ND, to Esther Margaretha and Gerhard H. Zitzow. He was the first born, followed by sister, Dorothea, and brother, LeRoy. He spent much of his childhood in the Perham, MN, and Vergas area, helping out on the farm and developing the diligent work ethic he was so well known for.

Grandpa Jerry lost his biological father when he was five, but his mother married Ed Kicker, who adopted Jerry and his siblings. At 16, Jerry officially became a Kicker.

Family was of the utmost importance to Grandpa, and shortly after moving to Fargo, ND, as a young adult, he met Kathryn "Kitty" Schnathorst. They got engaged, but before the couple could marry, Jerry was drafted into the Army to serve in the Korean Conflict. While on furlough from Army training, he and Kitty married on October 16, 1952. He shipped out to Germany days later.

In the service, Jerry trained as a combat engineer as well as a carpenter, fulfilling a lifelong dream he'd had since he was six when he received a carpenter's toolbox from a neighbor. When in Germany, he became company carpenter and assistant rigger of the 317th Pontoon Bridge Company. The company built bridges over the Rhine and Danube Rivers.

Grandpa returned to the states Christmas Day, 1953, and promptly started building a career-in building. He started his own company, Jerry Kicker Construction, where he designed and constructed custom homes mostly in Dilworth, but also in the greater Fargo-Moorhead area and Minnesota lake country.

Grandpa also set to building his family. Nine months after returning home from war, Daughter one, Valerie, was born. Daughter two, LaVonne, followed shortly after, and then Cynthia and Elana rounded out the Jerome Kicker Family. He called his girls "my special blessing in life" and taught them to be humble and kind, and also how to wield a hammer.

In 1987, Kitty Kicker passed away from heart failure, but Grandpa found a second lease on love and married life-long friend, Lois Walker, in 1988. The two merged their families and the Kicker empire expanded to include daughters, Pam and Debra, and sons, John and Ivan.

Rest well, Grandpa. Your crew can take it from here.

To order memorial trees or send flowers to the family in memory of Jerome "Jerry" Kicker, please visit our flower store.