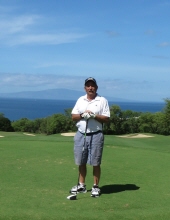 Jerry was born to Albert and Lucy (Pronovost) Fugere on July 16, 1949, at St. John’s Hospital in Fargo, ND. He was a lifelong resident of Moorhead and a graduate of Shanley High School. After eighteen months in the Army, he began working at American Crystal Sugar Company until he retired.

At one time Jerry was married to Debra Menholt. They had two children and were later divorced.

Jerry loved all things sports related whether it was participating or watching. He played softball for many years and would take annual ski trips. Jerry enjoyed hunting and he especially loved golf in his later years, having played in the FM area senior tour. Jerry also enjoyed spending time with his family; especially his grandchildren.

Jerry was preceded in death by his parents; son-in-law, James Windus; and brother-in-law, Timothy Pinkney.

Jerry’s family would like to thank Sanford Home Health and Ethos Hospice at this time for their care.

To order memorial trees or send flowers to the family in memory of Jerome "Jerry" Fugere, please visit our flower store.