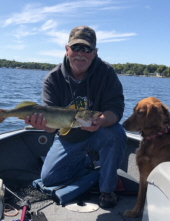 Jeff was united in marriage to Jennifer Sandvik, and they welcomed two sons, Jared (1990) and Brady (1993). They resided in Buffalo, ND, where Jeff worked for the county doing road maintenance. Jeff and Jennifer later divorced.
In July of 2017, he was reunited with his old high school crush, Deb Wolf. The pair soon started dating and knew they were meant to be together forever. In 2018, Deb moved into Jeff’s Buffalo home and resided there until 2020. They sold their Buffalo home and began searching for their forever lake home. The two were planning to be married once they found their dream home.

In 2003, Jeff started working for John Deere. He held various positions before retiring in 2021.
Jeff had many passions in life. He started Buffalo Sharp Shooters Club, working with kids around the area. Later, he became active with FM Walleyes Unlimited and area high school fishing leagues, sharing his love for fishing with youth. He enjoyed taking them to fishing tournaments whenever possible.

Jeff enjoyed fishing whenever possible, especially with his two sons. He also enjoyed hunting, breeding and rehousing golden retrievers, spending time with Deb’s granddaughter, Addy, watching Hulu and eating popcorn. Jeff loved being outside, listening to the sounds of nature, making his own fishing lures, spending time with his family, and he always enjoyed when the neighborhood kids came over to play with his dog, Kia.

You could always count on Jeff to lend a hand if needed. If you were in his company, you knew that a good time and abundance of laughter would follow.

He was preceded in death by his parents; and sister, Nancy Skaar.

In lieu of flowers, memorial contributions will be used to place a memorial bench near the lake in Jeff’s memory.

Visitation will be held Wednesday, August 3, 2022 from 5pm-7pm in Korsmo Funeral Chapel, Moorhead. Funeral Service will be Thursday, August 4, 2022 at 11am in Triumph Lutheran Brethren Church – East Campus, Moorhead.


To order memorial trees or send flowers to the family in memory of Jeffry R. Skaar, please visit our flower store.