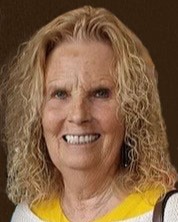 Jeanne's Funeral Service will be viewable by following the Livestream link below.  The livestream link will be activated at 10:45 AM.

Jeanne was born June 17, 1948, in Grygla, MN, to Roy and Ida (Nygaard) Paulson.   She graduated from Goodrich High School in 1966.  Shortly after high school, Jeanne was united in marriage to Arnold Kujanson.  They moved to Cedar Rapids, IA, and welcomed three boys, Scott, Jason and Trent. They moved to Horace, ND in the early 1980’s.

Jeanne worked as an office manager for an eye clinic in Fargo for many years and later was employed at Sanford Health in customer service until her retirement in 2012.

Jeanne was a devoted wife, mother and most importantly, “Grandma.”  Family meant the world to her and she cherished each minute being the “Best Grandma” a family could ask for. In February of 1993, Jeanne was united in marriage to Robert “Bob” Footitt and proudly gained two additional sons, Bill and Bob Jr.

A true heart of gold, Jeanne cherished time with her family, especially her grandchildren. She often donated to her daughter-in-law’s school classroom, making sure each student had what they needed for the year.  Her gifts at school became known as “Grandma Jeanne’s Supplies.”   She also enjoyed her fur babies, buying gifts for family and friends, watching movies, antiquing, shopping and traveling.   During the winter months, Jeanne and Bob visited Maui and Arizona.  She loved walking the beaches of Hawaii, going for a hike on the trails, and soaking up the sun in Arizona.

She was preceded in death by her parents, Roy and Ida; mother-in-law and father-in-law, Robert and Ann Footitt.

Funeral Service for Jeanne will be Monday, January 23, 2023, at 11 AM in Faith Journey Lutheran Church, West Fargo, ND.  Visitation will be one hour prior to the service.  Jeanne’s service will also be livestreamed here on her obituary page.

To order memorial trees or send flowers to the family in memory of Jeanne E. Footitt, please visit our flower store.