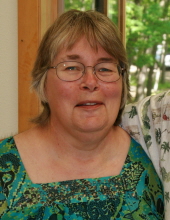 Janice M. Johnson, 75, of Moorhead, MN, passed away Monday, October 24, 2022, in Sanford Health-West Campus, Fargo, ND, with her loving husband by her side.

Janice Meretta Brett was born March 13, 1947, in Moorhead, the daughter of Milton and Virginia (Saul) Brett. She was raised on Pickerel Lake, near Detroit Lakes, MN, until she was six, when the family moved to Fargo. Janice attended school in Fargo and graduated from Fargo Central High School in 1965. She then moved to Texas for three years, before returning to Fargo where she worked at Harval, as a seamstress and later for Silverline, where she met Martin..

On September 12, 1980, she was united in marriage to Martin Johnson, the love of her life, in St. Francis de Sales Catholic Church in Moorhead. They made their home in Moorhead and over the years, Janice worked at J & L Sports, Solid Comfort, Osco-Buttrey Bakery and Sugarsand. After retirement, Janice and Martin have continued to live in Moorhead.

She was a member of St. Francis de Sales Catholic Church, Moorhead.

Janice enjoyed spending time outdoors planting vegetables, flowers, and decorating the yard with many figurines. This also allowed her to spend time with her most recent three beloved dogs, Patches, Buster and Molly. Janice was a kind hearted and gracious lady with a contagious laugh and smile.

She was preceded in death by her parents; twin sister, Joanie Faris; brothers, David and Robert (who passed away on October 21, 2022); an infant brother; mother and father-in-law, Katherine and Conrad Johnson; and brothers-in-law, Gary Faris, Douglas Smith and Donald, Allan and Curtis Johnson.

Memorials may be directed to Sanford Hospice.

Her Memorial Mass of Christian Burial will be 11:00 AM, Friday, November 4, 2022, in St. Francis de Sales Catholic Church.

To order memorial trees or send flowers to the family in memory of Janice M. Johnson, please visit our flower store.