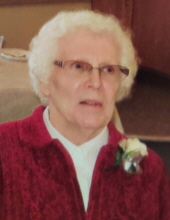 Janet was born at Edgeley, ND, on January 21, 1928, to Stanley and Morva (Shay) Ziegler. She grew up on a farm near Alice, ND, attended a rural country school and later graduated from high school at Fingal, ND. Following graduation, she attended and graduated from Interstate Business College of Fargo and worked for Northwestern Bell Telephone in the billing department for three years.

She met and married Arvid Anderson of Hillsboro, ND, and they farmed at Arthur, ND, for 47 years until Arvid’s death in 1996.

Following her husband’s death, Janet and her son, Wayne, shared an apartment in Fargo until his death in 2014. Some of Janet’s fondest memories were the 27 driving and bus trips that she took with son Wayne and her sister Ardis Rhoades of Coleraine, MN. Janet lived the remainder of her life at Bethany on 42nd in Fargo until her death.

She was preceded in death by her parents, Stanley and Morva Ziegler; husband, Arvid; and sons, Dennis and Wayne.

In lieu of flowers donations should be made to Gigi’s Playhouse of Fargo, a home for mentally challenged children.