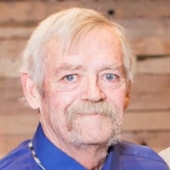 James Melvin Stockstad, the son of Olaf Melvin and Nellie Nadene (Bergstresser) Stockstad, was born on Father's Day, June 20, 1948, in Graceville, MN. From there the family moved to Great Falls, MT, where his sister, Jackie, was born. They then moved to Minot, ND, before settling in Moorhead in 1957 where Jim graduated from Moorhead High School in 1966.

In 1968, Jim married Cathy Wurzbacher and together they had two daughters, Lisa and Jamie. Jim joined the Naval Reserve in 1968 and served his country in Da Nang, Vietnam from 1969 to 1970. Upon returning to the United States he enrolled in electronic classes at Moorhead Technical College.

Jim worked as a Service Manager for Traveland, a film tech for the Safari Theater and owned Pro Tech Electronics. He later worked for Don Engebretson Construction with his last employment as maintenance engineer at the Stamart Truck Stop. In 2001, Jim married Carol Dodge and they made their home in Moorhead.

Jim was always on the go and taking on amazing projects, He and Carol bought a fire damaged house that he restored into a beautiful home, complete with his dream garage. In his garage, he worked on his pride and joy, a 1977 Corvette. He enjoyed going to car shows and was proud of the trophies he received for his restoration. It was a true testament to his hard work. Jim enjoyed sports and played softball, bowled and loved golfing. He also enjoyed camping at the NHRA drag races in Brainerd, MN. It was during this event Jim was able to spend time with his friend he affectionately called his "nother brother" Robert "Butch" Olson. He liked motorcycles and motorcycle races. Jim was a big NASCAR fan and his favorite driver was Jeff Gordon. He was so excited when he had the opportunity to watch Gordon race in the Daytona 500.

Jim was the "go-to" guy if you needed help building, fixing or refinishing. He was a "quick-witted" prankster who loved life and his family.

In his final year he was a resident of Rosewood on Broadway in Fargo, where he once again touched people's lives with his spirit. Even though he wasn't able to speak much or walk, he still managed to wheel himself around and cause mischief. The wave of his hand and precious smile made people happy.

The family would like to give our heartfelt thanks to the amazing staff at both Rosewood and Hospice who provided such wonderful care and love.

He was preceded in death by his parents; and brother, Gerald "Jerry" Dworak.

O'Kelly's at the Bilmore Hotel

O'Kelly's at the Bilmore Hotel

To order memorial trees or send flowers to the family in memory of James M. Stockstad, please visit our flower store.