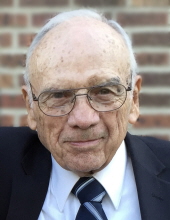 Jim was born February 25, 1929, to Timothy Patrick and Catherine Agatha (Dewey) Matchie of rural Jamestown, ND. He was the eldest of four children, all of whom were born in the Fargo, ND, hospital 100 miles from home. He grew up in Rose Township until he was six when the family lost the farm in the Great Depression. A mostly stoic man, he would tell tearful stories about that time, taking his red wagon to get groceries from his grandparents; seeing men standing in soup lines. His mother started Central Dakota Business College in Jamestown, ND, which Jim eventually managed after she retired. It was here where he met one of his mother’s students, Dolores Vendsel; when she saw him she said, “I’m going to marry that man.” And she did.

He graduated high school from St. John’s Academy in Jamestown in 1947, where generations of family members were educated. He attended St. Thomas University in St. Paul, MN, then enlisted in the Air Force. He and Dolores were married in Valdosta, GA, near the base on July 13, 1951. His brother Tom was their bridesmaid. He graduated Moorhead State University with a bachelor’s in education, while she worked at Blue Cross in Fargo with Ida Kolpack, the start of a life long friendship. He taught school and coached basketball in Jordan, MT, Middle River, MN, and Chaffee, ND. He led the Jordan team to win the Montana state basketball tournament.

Jim studied for his Graduate Degree in Business Education at St. Cloud State and Moorhead State University where he received his degree in 1972. In 1973, he and Dolores moved to Wausau, WI, where he taught at North Central Technical Institute for over 20 years. Dolores died in 2000. Prior to that they enjoyed camping at R&D Resort with The Traisers in Osage, MN, and Big Eau Pleine near Mosinee, WI. After Jim retired, he and his brother Tom took up riding jet skis together, and when Jim’s machine became weed laden, he’d always make Tom get off and remove them.

In 2006, Jim married Marna Kasprzycki of Wausau until 2015 when he moved to Fargo. He resided happily at Riverside Place with a beautiful view of the gardens, weekly Bingo games and the friendship and support of the staff. He often said how lucky he was to live there.

The highlight of his day was to make a trip to Randy’s University Diner where Heidi and all the folks who worked there greeted him by name; his coffee and lemon meringue pie were often waiting by the time he got to his table. With a requisite photo, he’d pose with the impossibly tall meringue before relishing every bite. Those photos were shared on Facebook and he developed a following of pie lovers around the world who also looked forward to the twinkle in his Irish eyes.

The day before he died, he reaffirmed his focus was the love of his family and his hope to make the world a better place. He always looked out for “the little guy” and often said, “Ours is a very poor form of government but it’s the best in the world.”

He was preceded in death by his wife, Dolores; his parents, Agatha and Tim; sister, Mary Pat Keyes; and dear friends, Karen and Bob Traiser.

Thank you to all who loved him. He marveled at all the comments on his FB posts (although he never really understood how that worked). He readily agreed to adopt anyone who needed an extra dad or the warmth of a hug. His drawers are packed with cards from kind friends, many of whom he never met in person.

Jim died on October 8, 2022, at Riverview Place under the gentle and capable care of Sanford Hospice. We are missing his love of laughter, his two thumbs up and his very dry quips, although they live on in the voices of all his grandchildren who were lucky to know him as he lived to the good age of 93, or 96, (he could never remember).

A visitation will be held at Korsmo Funeral and Cremation Service in Moorhead, MN, on Thursday, October 13, 2022, at 11 AM, The memorial service will be at 12 PM, with a little lunch to follow. Jim will be buried next to his wife, Dolores in a private ceremony at the family plot, Calvary Cemetery, Jamestown, ND.

To order memorial trees or send flowers to the family in memory of James "Jim" T. Matchie, please visit our flower store.