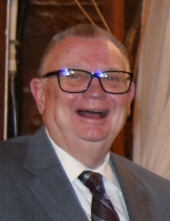 James Michael Ramstad, known to all as Jim, was born August 12, 1946, in Moorhead, MN, to Lyman and Carlla (Lomsdal) Ramstad. He graduated from Hawley High School in 1964. Following high school, he attended NDSCS in Wahpeton, ND, and played one season of basketball. On April 16, 1966, Jim was united in marriage to Marsha Moe in Hitterdal, MN. After college in Wahpeton, he transferred to Moorhead Sate College in Moorhead, MN, graduating in 1968 with a BA degree in business administration and accounting. Jim’s accounting and business knowledge offered him many opportunities through the years. After college Jim and Marsha lived in the Minneapolis/St Paul area, where Jim was employed by Control Data Corporation. In 1972, they moved back to Moorhead. Jim was employed at Barett Mobile Home Transport for 25 years, working his way to CFO of the company.

In 1997, Jim accepted a position with GEM (Global Electric Motor Cars), and they moved to the Phoenix, AZ area. Jim was transferred to Fargo with GEM car in 2000. That same year, Jim and Marsha lost their son, Jonathan. They moved back to the Phoenix area in 2004 and Jim started his career with Eide Bailly in Phoenix. Their love for the lake country brought them back to Minnesota in 2012. Jim never did really retire. He worked as a consultant to many different companies and nonprofits, advising anyone who needed his help. He enjoyed spending time with his family, especially getting everyone together at their lake home. Jim loved sports, especially watching his daughters swimming and his grandchildren/great- granddaughter play basketball. He enjoyed golf and boating as well. He was an active member of Lake Eunice Evangelical Free Church in rural Detroit Lakes, MN, participating in numerous Bible studies. He felt his mission from our Lord was to use the gifts God gave him and get as many people he knew to Heaven by the belief of Jesus as our Savior. He delighted in the time he spent with his three great- granddaughters.

He is preceded in death by his parents, Carlla and Lyman Ramstad; sister, Kathryn Ramstad; and son, Jonathan Ramstad.

Visitation for Jim will be held Sunday, April 10, 2022, from 6pm – 8pm, with a Prayer Service starting at 7:30 pm in Korsmo Funeral Chapel, Moorhead. Funeral Service will be Monday, April 11, 2022, at 11 am in Bethel Church, Fargo. Interment will be in Lake Eunice Evangelical Church Cemetery, rural Detroit Lakes.

To order memorial trees or send flowers to the family in memory of James "Jim" Ramstad, please visit our flower store.