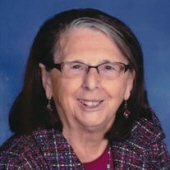 Irma Ely, the daughter of George and Mae Vivian (Salter) Ely, was born July 24, 1931, in Bismarck, ND, where she was raised. Irma moved to Fargo, ND, where she was set up on a blind date with Dennis Klocow. On November 21, 1964, she married Dennis, and they made their home in Moorhead and Georgetown, MN. After Dennis passed away in 1994, she lived with her children, in Moorhead. Irma spent many years working at Moorhead Manor cooking and worked into her 80s until a hip injury forced her to retire.

Irma was known for her cooking and her baked apple pies. She was an avid gardener, with raspberry bushes and a Christmas cactus that she kept alive for 50 years. Irma had a unique sense of humor, making people laugh without intending to. Irma was a breast cancer survivor. Not even cancer could slow her down. She was always full of energy, ready to enjoy the lakes or camping.

Irma had a great love for her family. She enjoyed spending time with her grandchildren and her dog, Bailey and cat, Mitzi.

A Visitation for Irma will be one hour prior to her service. Her Funeral Service will be Saturday, November 17, 2018, at 2 PM in Our Savior's Lutheran Church, Moorhead. Burial will be in Riverside Cemetery, Moorhead.

To order memorial trees or send flowers to the family in memory of Irma F. Klocow, please visit our flower store.