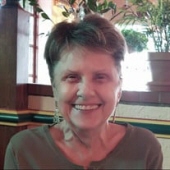 Ilene Jones Tumbleson was born in Louisville, KY, December 20, 1942, to Paul and Lula Jones. She made her home in Kentucky, Arizona, and most recently in Minnesota.

Ilene began working as a waitress, then after completing her education, became a bank teller, and ultimately head teller. Ilene struggled with lung disease all of her life, and eventually her health necessitated her early retirement.

Ilene was a loving and spunky daughter, sister, wife, mother, grandmother, niece, cousin, and friend. She loved music (except the British invasion) and dancing. She enjoyed crocheting, fishing, and playing cards with her friends.

Ilene passed away on May 31, 2019, due to complications following surgery, at seventy-six years of age.

A private family memorial service will be held Friday, June 7, 2019. Interment will be at Riverside Cemetery in Moorhead.

To order memorial trees or send flowers to the family in memory of Ilene K. Tumbleson, please visit our flower store.