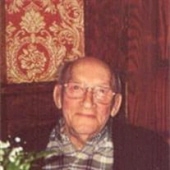 Howard Jack Rinehardt was born July 5, 1916, in the township of Atlanta near Ulen and Lake Park, MN, to Oscar and Martha (Aase) Rinehardt. At an early age the family moved to Fargo.
Howard served in the Army during World War II. Upon his discharge from the military, he returned home and married Marion C. Lindgren on October 1, 1948, in Detroit Lakes, MN. The couple made their home in Fargo where Howard worked as a service manager for Berkey Lincoln-Mercury until retiring in 1979. He then worked as a custodian at the El Zagal Shrine, Fargo.

Marion died on September 24, 2001 and Howard became a resident of The Evergreens in December of 2002.

To order memorial trees or send flowers to the family in memory of Howard Rinehardt, please visit our flower store.