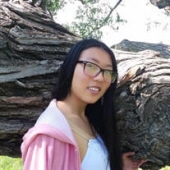 ç½-æˆèŠ±, "èŠ±èŠ±", was born October 17, 2002, in Qinghai Province, China. She did not have any memories of her birth mother. At the age of six, she ran away from her birth father's countryside home. She was found by a lady who eventually brought her to the Xining Children's Home. She lived in a foster family apartment setting on the campus of the Children's Home until she and her foster brother were adopted by Craig and Kristi Thomas on September 5, 2016. Hope did not know Jesus at that time, but slowly came to express faith and trust in Jesus, and desired to be baptized. She was baptized into Christ at Messiah Lutheran Church, Underwood, MN, on June 24, 2018. Her uncle, Pastor Tim Collins, officiated. Her cousins, Paul and Alexandra Fraser, and friends, Dean and Sarah Peterson, are her baptismal sponsors.

Craig and Kristi first learned about Hope when they were visiting Qinghai Province in October, 2014. Kristi met a friend at the Children's Home, and was introduced to a lady who had been volunteering there for a while. When she heard that Craig and Kristi already had two daughters who were adopted as teenagers, she said that maybe we would like to adopt "èŠ±èŠ±" (pronounced, hwa hwa). Kristi immediately said, "Yes!" When Kristi saw Craig later that day, she told him that she had found their third daughter. Craig was immediately thrilled. They began the adoption process shortly thereafter.

"èŠ±èŠ±" means flower. She was given the name Hope because the presence of flowers gives us the hope of fruit; she endured much emotional pain in her young life but could have hope for the future both in this life, and in eternity with Jesus. Hope told us that one night she had a dream that she was telling her Children's Home community about Jesus.

Hope attended a local school in Xining while she lived at the Children's Home. Once she was adopted, she began to learn English and continued her studies through home schooling. She memorized many Bible verses during this time, both in Chinese and English, and would often recite them to her Grandma Marion. She was a perfectionist with her school work.

One of Hope's joys in life was ballet dancing so she took lessons at Messiah Dance School until the pandemic disrupted this. She thoroughly enjoyed swimming and bicycling as well. A while back she got some morning glory seeds as a gift; she planted them last summer and was so proud of them. Hope loved animals and really enjoyed the kittens and baby goats at her uncle and auntie's farm. Once Hope learned to play the card game, Rook, she played it regularly with her sisters, grandma, and other family members. Hope would sit for hours putting together puzzles or doing crafts. Her bed was filled with stuffed animals. She loved to dress up. Hope loved cooking up large portions of Chinese noodles; and would fill her pockets with fruits and vegetables. Hope was so looking forward to going to Disneyland with Daddy, but did not get the chance.

Due to some struggles with headaches and recent weight loss, the pediatrician ran some tests. On Monday, May 18, an MRI revealed a large brain tumor in her ventricles. Hope did not exhibit anxiety over such a big operation (the only thing she worried about was whether she might have to have her beautiful, long hair cut). The morning of the surgery, Thursday, May 21, she and Mommy talked about the words of Jesus in John 14:1 "Do not let your hearts be troubled. You believe in God; believe also in me." The surgery went fine, but a few hours after the surgery, Hope began to show signs of neurological distress. She was taken back to surgery two more times in the subsequent hours, but never did wake up. Despite countless prayers, and fervent, caring medical interventions, God, in His infinite wisdom, chose to bring Hope into eternity, rather than to allow us to continue to walk with her through life on earth.

To order memorial trees or send flowers to the family in memory of Hope Mariana Thomas, please visit our flower store.